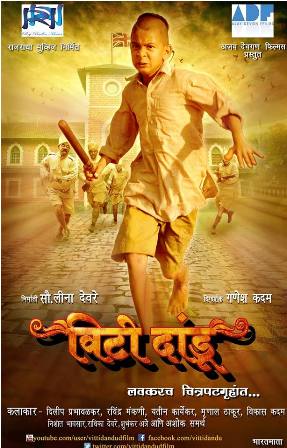 Scheduled to hit the theaters by the end of the ongoing year, the Marathi film ‘Vitti Dandu’ shall witness the debut of Ajay Devgan, the Bollywood hero, to the Marathi film industry. The Ajay Devgan films, the production hose of the actor shall be presenting this film which shall be a periodic drama in its genre.

The plot of the film shall centric around the mutual clash and triumph between one’s patriotism and the love for his human connections. The story shall narrate the relationship of a grandson with his grandfather. The casting to the film had been through facers like Dilip Prabhavalkar, Ravindra Mankani, Yatin Karyekar, Mrunal Thakur and Ashok Samarth. Roles had been offered to child artists like Radhika Deore, Nishant Bhavsar and Shubhankar Aatre, too.

The film had been produced by Leena Deore, under the banner of Rajradha movies, while it is being directed by Ganesh Kadam. The tunes for this film had been set by Santosh Mulekar.

As narrated by the director, the film shall progress in the style of narrations of the personal experience made by the grandfather to his beloved grandson. Specifically, it can be stated that this is all about the communication of a grandson of past to his counterpart of the present times. The story starts to uncoil with just six days to go for the independence of the country in 1947 and the back drop is a village of that period that usually receives information post eight to nine days from the day of occurrence of any event. As claimed by the director, the movie shall have a rich blending of Relationship, Love, Patriotism, Drama, Humor and Action. The director is of the notion that attempts had been made to shoot the film at the background of scenic locations and the tunes of the movie, as expected by its crew, shall drag the audience on a different state of mind.