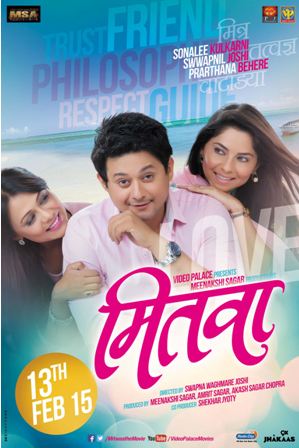 The release of the Marathi movie ” Mitwa” scheduled tentatively around the Second Week of Feb this year shall see the happenings of several thing s for the first time. This film shall be the first feature film of the third generations of the sagars, Menakshi Sagar, the granddaughter of the legendary Ramanand Sagar under her own banner ‘Meenakshi Sagar Productions’. Thus, the movie lovers shall definitely be interested to see the transformation of an established writer into a director.

This film, belonging to the category of romantic triangle clash for its genre, shall be casted by Swapnil Joshi and Sonali Kulkarni in its lead positions. The pairing of this duo shall also be witnessed for the first time through this movie. To cast the position of the second female lead, the director had decided to introduce a fresh face to the audience and for this talent hunts are being conducted in one of the leading television channels.

Under the direction of Swapna Waghmare-Joshi, the tunes of this movie shall be composed by Shankar Ehsan Loy with notable contributions from other music directors of the Marathi film like Nilesh Moharir, Pankaj Padghan and Amitraj have each composed one song for the movie. Out of its various musical numbers, one had already been popular among people. This movie shall be presented Video Palace, owned by Nanubhai Jaisinghani.

The script for this film has been written by Shirish Latkar, whose already holds the fame of Hindi tele-serial Pavitra Rishta and Marathi TV show Swapnanchya Palikadale, behind his name.. Prasad Bhende, who earlier handled camerawork for Marathi film Duniyadari, will be the cinematographer for Mitwaa also. The film has art direction by Mahesh Salgaonkar while its executive producer is Sanjay Dawra.

The director and the team of crew seem to be very optimist on the possibility of success for this movie.