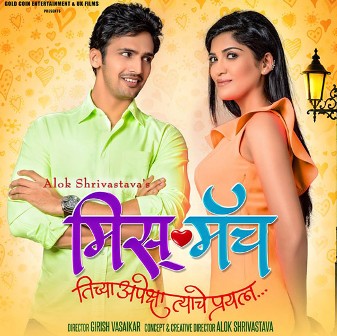 Plot : Girish Vasaikar latest movie “Miss Match” had been able to drag the attention of the people upon it since it had hit he theaters in June this year. The plot for this movie can be categorized to be a romantic one for its genre. The film had been produced by Alok Shrivastava and the leads are casted through Bhushan Pradhan and Mrinmai Kolwalkar. The director had been assisted with music compositions for this movie by Manas on the lyrics documented by Ashish Panay. The screenplay had been made by Nitin Dixit. This film shall see the legendary Asha Bhonsle giving a mesmerizing rendition once again after a long while she did any playback singing for any commercial films.

As heard of the director, efforts had been made to keep the screenplay free of any extra pounds that normally inculcates in the romantic movies. However, the director is of the notion that his film shall re rich in emotional contents and its appeal will make all class of people easily relating the movie with the experiences of their personal life. The claims of the directors seems to match the verdict of the people as the initial collections at box office witnesses for this film making sufficient revenues for it. The producers are optimist that in subsequent time more and more people shall go for watching the movie, including the ones going for their second show of the movie.

As spoken to the male and female leads, both of them stated that they really enjoyed being casted in their respective roles for this movie and shall look forward to pair up with the same director in days to come.

The class of people, who prefers the softness of romantic movies and are fond of romantic music tracks can definitely go ahead to catch up a show at their nearest theater.