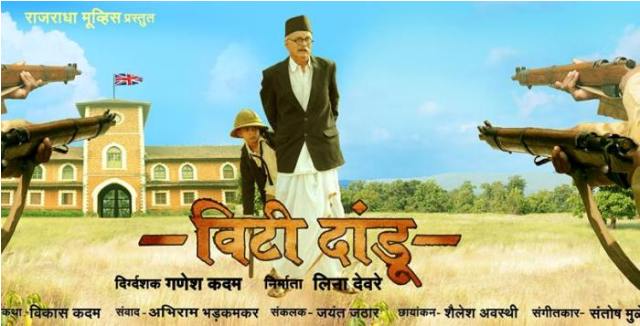 Can you tell me, what the word ‘Creativity’ means? I know we all know its meaning but keeping a beautiful meaning on his mind the well know star ‘Ajay Devgan’ an actor who’s just like unbeatable amongst the other celebrities, but now what the picture comes into play is, ‘Ajay’ will be soon seen as a dashing ‘Producer’, Yes! You heard this right, a star who was just fabulous with his actions and style in Bollywood is ready to step into the shoes as a producer for a Marathi movie, ‘Vitti Dandu‘.

I’m sure the news might have given some of you a bit of shock but though it is rightly said ‘we cannot measure the depth of lake unless n until we take jump into the water’ in the same way following the beautiful quote, ‘Ajay’ would surely create an UN-explainable strike in Bollywood as a producer. However, if we talk about the movie then it is truly based on a relationship between a grandfather and his young grandson, which is slated on release by the end of this year, and as per news the trailer is set to be unveiled with ‘Singham Returns’ in theatres, and though the movie is Marathi, so here are the dashing stars of Marathi cinema on the floor, featuring Dilip Prabhavalkar, Ravindra Mankani, Yatin Karyekar, Radhika Deore (child artist), Mrunal Thakur Nishant Bhavsar (Child Artist), Shubhankar Aatre (Child Artist), and Ashok Samarth as leading characters in the movie, it will surely rock the Bollywood with its massive views.

Previous Mahesh Manjrekar’s Rege and Singham Returns Releasing On 15th August
Next Movie Review : Rege is a Crime Thriller With A Difference