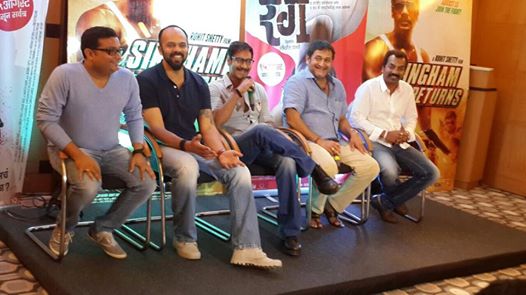 Bollywood fans are ready to celebrate this year’s Independence Day with popular Bollywood director Rohit Shetty’s Singham Returns. The film sees Ajay Devgn resuming his lead role from the first movie of the Franchise. Kareena Kapoor Khan is playing his love-interest in the cop flick. Rohit Shetty, the director with the golden touch, has managed to deliver as many as five consecutive blockbusters, his last release being the Shah Rukh Khan-Deepika Padukone starrer Chennai Express. The film was one of the biggest money-spinners in 2013 and the entire crew of Singham Returns is extremely positive about their current offering.

But, tension has build up when the news of Marathi film Rege clashing on the box office along with Singham Returns. Both the films have chosen Independence Day as their release date and this is the reason box-office gurus are skeptical about the fate of the two films. Rege starring Mahesh Manjrekar is directed by Abhijit Panse. Ravi Jadhav is releasing the movie and according to news reports, he is very positive about the outcome of the movie. He says that in the past, Marathi movies like Natarang had release along with Bollywood’s Three Idiots. But, both the movie had a great run at the box office.

Rege is a Marathi movie and Singham Returns has a Marathi backdrop. It seems that this Independence Day will present an action-packed treat for Marathi cine-goers. The Marathi film industry is booming and has been producing quality stuff for quite some time now. Singham Returns is going to be one of the top Bollywood releases in August, and with the two movies clashing on the same day, a lot of excitement will be felt on the ticket counters from the morning of 15th of August. We wish the best for both the movies and may they break all records!