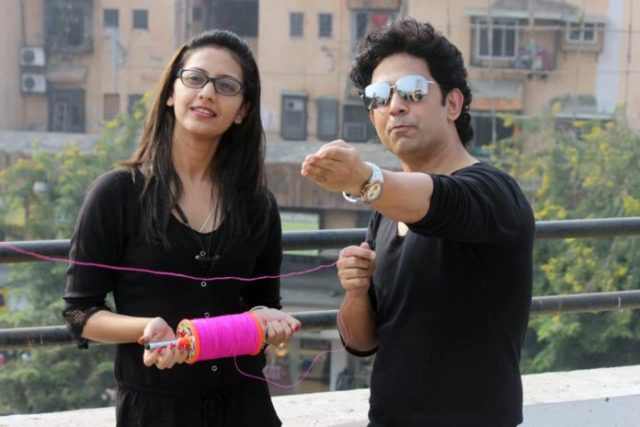 With Makarsankrant on its way, we have seen the M Town actors too enjoying the festival of kits. Both the actor Umesh Kamat and the lady actor Tejashri Pradhan were seen enjoying the festival of kids together. The event was meant to announce their upcoming film on the eve of this festival. Their upcoming film is called as ‘Asehi Ekda Vhave’ which is produced by the known filmmaker Madhukar Rahane under his own banner ‘Zelu Entertainment’. The very same event also witnessed the event of flying kites over their terrace at the popular plaza theatre based at Dadar in Mumbai where we saw the event being organised.

Both the actors Umesh and Tejashri were seen distributing the ‘Tilgul’ to the guests who were present for the event. The film would be directed by Sushrut Bhagwat who earlier was seen directing the movie called ‘A Paying Ghost’. The first look teaser poster of the movie has been released in the media particularly in the social media and it showcases us that this movie will be a romance genre film, which will also stars the actress Sharwari Pillay in an key role. The film starring Umesh Kamat and Tejashri Pradhan is all set to hit the theatres all over Maharashtra on 6th April 2018.

Previous Hostel Days Movie Review : How Abusing the Hostel Life Could Be
Next Catch the Gulabjaam Movie Teaser it is simply tempting