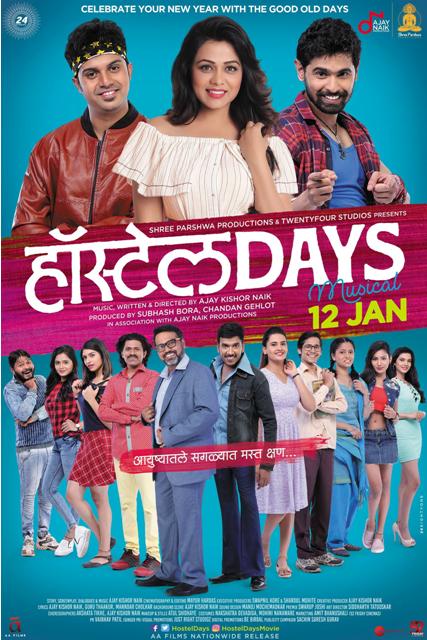 The film is made at the backdrop of nineties at National College in Satara, which offers a wide range of courses right from arts to science, engineering and medicine to name a few to the students of urban and rural alike. The film talks about love, relationship and issues related to them in the pre-youth while one remains in the college and hostel in particular. So, what goes inside the film, it would be interesting to catch in your nearest cinema.

We often call a hostel to be a safest place, however, with films like Hostel Days’ it may not be called as safer now. The film can be called is a reflection of bad things that happen in a hostel room within the 2 & a half hours long duration. However, the film starts with a conflict that comes so late just in the middle of the movie in a sense unable to hold the audience right from the start. On the other side, it can add nostalgia to all the people who have been gone through this phase in their student life. In way you will not find anything new in the film thus the film ends up becoming minimally entertaining. Also, there are several flaws in the story as well that question the way the colleges function. The film is technically sound though and has some good songs as well but with debutants mostly in the lead roles make things meager in terms of performances. Only Kulkarni and Welankar seemed good others were seen in small roles with less impact, while Rukari and Behere would add the glamour to the movie.

With all said and done, the movie is seen wasting loads of time in making the interpersonal relationship along with reaching out to an interesting aspect of the film only in the later part of the film. The youngsters can be seen identifying with the movie that can be worthy to catch. For the regular viewers, the film simply is any other college film, which could have been made better rather than being mildly entertaining.