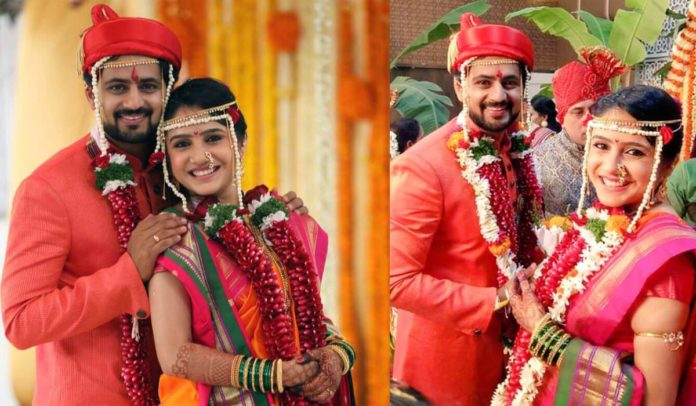 Remember, the actor Shashank Ketkar , yes same man from from ‘Honar Sun Mi Ya Gharchi’, well the latest update from his life is that he has lost his bachelor degree and have got married to wedding knot to his long time friend Priyanka Dhawle who is a practising lawyer. This is his second marriage as he was previously married to the actress Tejashri Pradhan who happened to be his co-star from the TV show called his ‘Honar Sun. But later the couple was seen getting separated.

The actor Shashank Ketkar has proved to do well on a number of other mediums after he got the success of ‘Honar Sun Mi Ya Gharchi’ TV serial. He was seen doing well for the M Town movie called the One Way Ticket’ film & don’t forget the superhit play called ‘Goshta Tashi Gamtichi’. Well, his marriage was a sudden affair when we just got his engagement pictures going viral over the social media a month ago.

The fans of the actor were seen sharing his pictures a  month ago his engagement worked out and it went  viral over the social media. The lady called Priyanka Dhawle happens to be a  lawyer by profession and is known to be his friend since past few years. Now when the actor has got married, we see his pictures of marriage going viral over the social media. We wish the two a very happy and prosperous married life and may they go smooth in their personal and professional lives. Stay tuned to know more about this news and others only with us and yes don’t forget to get in touch with us with your comments and views.