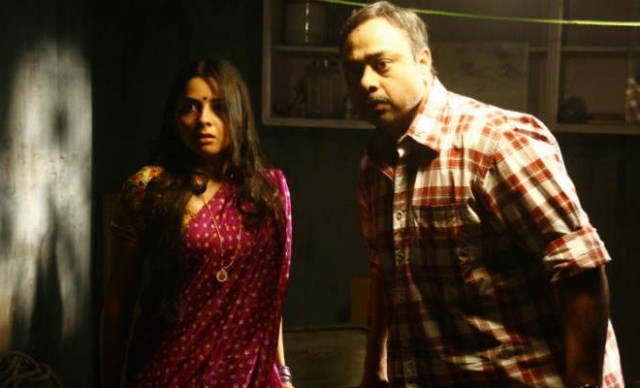 Shutter, starring Sachin Khedekar , Sonalee Kulkarni and Amey Wagh is a suspense thriller with a nail biting finish. Directed by VK Prakash, the film is a remake of a hit Malayalam film. The film is a story about Jitya Bhau, a business man returned from overseas, his friends Govind (played by Prakash Bare) and Ekya ( played by Amey Wagh) and a prostitute played by Sonalee Kulkarni. The story trails in the framework of two days. The incidents that happen in one night forms the nucleus of the story and the following day brings the climax. There is immense novelty in the film which is refreshing for the audience. Also impeccable acting performances by lead actors makes the film a thorough entertainer.

Jitya Bhau ( Sachin) , has just returned home from overseas and meets his friends Ekya and Govind. After the friends spend the time drinking , Govind , under the influence of alcohol, decides to play a prank over poor Jitya and locks him with a prostitute in a garage. The two then have to spend the two days together waiting for the friend to set them free. The interaction between the two results in the unfolding of many stories. The real trouble is waiting them as soon as they are freed.

Sachin Khedekar , the veteran actor, portrays the confusions and apprehensions of a simple middle man caught between himself and his social commitments. His maturity in handling the subject makes his performance a very realistic one. Sonalee Kulkarni essays the role of a prostitute who has a lecherous smile but has layers and layers of stories within her. Her work is commendable for it’s boldness and also for it’s realistic touch. The pace of the film is fast as it covers two whole days and the treatment of the subject builds suspense and thrill that makes it a gripping film. By the time the climax approaches the characters untangle them from their web of troubles. There could not have been a better nail biting finish to this unusual events.

Director VK Prakash brings out Shutter retaining the story and script but changes the setting from the original Malayalam version. It captures the common man’s life and predicaments faithfully. The story that lasts for the duration f two days could not be anything but realistic. Music by Pankaj Padghan blends with the setting of the film and makes it even more intriguing.

Even for those whose favorite genre is not suspense, Shutter will be worth the money and time.