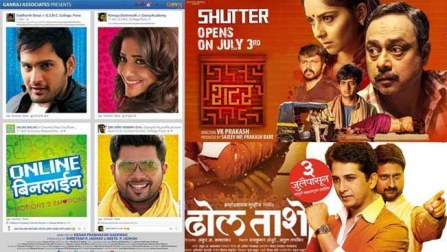 Sachin Khedekar starrer Shutter and Online Binline released this week. The two films which belonged to different genres were released got warm responses from the Marathi audience. With there being no big Hindi film releasing this week, the Marathi films received much attention and publicity. Online Binline stars Hemant Dhome and Siddharth Chandekar alongwith new comer Rutuja Shende in the lead roles. Sachin Khedekar and Sonalee Kulkrani play matured characters in the film , Shutter. Shutter is a suspense drama with an intriguing story while Online Binline is comedy based on the subject of internet addiction.

The Total occupancy in the theatres was reported to be around 65 % for both the films across the state of Maharashtra. Shutter is expected to collect a total of 2 Crores in all. Online Binline may be around it’s counterpart with an amount of 3 Crores.