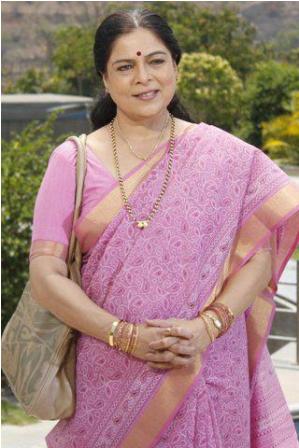 Reema Lagoo is one of the most popular onscreen mothers in Hindi and Marathi films. The actress, who began her career in the year 1980s with Marathi theatre and TV serials, is a gifted actress and has created a special place for herself in the audiences through the endearing characters she has played. In the nineties, she emerged as a n extremely poular actress in mother’s role with the films like Mene Pyar Kiya and Hum Apke Hain Koun. Her performances were subtle and intense. She was the first choice for such roles for every filmmaker in those days. Her gift as an actress lies in the fact that she can be intense and spontaneous in comic and serious roles equally. Her motherly acts will touch your heart and her comic timings will create rib tickling laughter. Apart from roles in the films, Reema Lagoo became extremely popular with her comedy serious on Doordarshan like Tu Tu Main Main, Shriman Shrimati .

Her talent is an inheritance from her mother who was also a theater actress. Reema stepped into theater at a young age ,a fresher after her college. Being active in Marathi industry for few years, the first role in Hindi that brought her huge acclamation came in Qayamat Se Qayamat Tak ( 1988). In the super hit film which was a celebrated debut for Amir Khan, she played the role of Juhi Chawala’s mother and left a lasting impression. Later her association with Rajshri films, playing mother to Salman Khan began and the two have made a lovely mother- son duo on screen ever since. For one such film, Mene Pyar Kiya, she received the best actress Filmfare award. There after followed many similar awards for the films like Hum Aapke Hain Koun , Ashiqui and Vaastav. In all of these she has portrayed memorable characters in different shades of motherhood. Other films in which she played prominent roles include Saajan, Shriman Ashique, Rangeela, Pyar Toh Hona Hi Tha, Kuch Kuch Hota Hain , Kal Ho Na Ho, Hum Saath Saath Hain and Kya Kehna.

Reema Lagoo had tied the nuptial knot with another stage actor of Marathi theater named Vivek Lagoo . The couple parted ways after few year of their marriage. Her daughter Mirnmayee is also a stage actress in Marathi. The actress continues to make her valuable contribution in films. Her recently released films include both comedies and dramas.