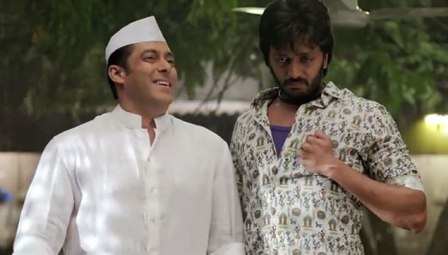 Salman Khan was the guest at the music launch of Saangto Aika. The actor was full of praise for Marathi film industry which he said is immensely rich content. Marathi cinema has constantly produced intellectually rich content and excellent actors over the years. It is continuing to do so. Regional cinema deserves to be appreciated and encouraged. The actors in regional films are also great contributors to the variety. They also need to be given their due.

Salman left no stone unturned to shower praises upon the doyens of Marathi cinema. He said he was always a big fan of Marathi cinema but never got a chance to associate himself with this regional cinema. This year , in the Reithesh Deshmukh’s home production, Lai Bhari ,he made a guest appearance. He said he cherished the opportunity to work in a Marathi film . He added that he looks forward to more opportunities in Marathi films. When asked whether he would like to act in a full fledged role in Marathi film, he was quick to that he would love to produce and act in one.

Salman was looking dashing at the event in his simple black shirt . The launch was attended by the star cast of the film Saangto Aika including the lead actor Sachin Pilgaokar.