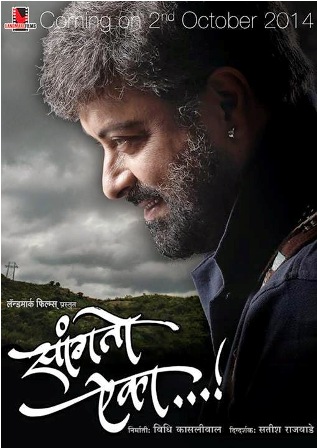 Plot : Sanngto Aika is the new upcoming Marathi movie. Story of the movie is written by Parag Kulkarni and the film is directed by Satish Rajwade. The film is set to release on 2nd October all over Maharashtra. Sanskruti Balgude, one of the leading television actress is making her debut with this film.

It will be the first film in which two Marathi film popular personalities will work under named Sachin Pilgaonkar and Satish Rajwade. The story plot of the movie shows up a drunken standup comedian man somehow finds himself alone in his struggle of life. Story takes a sharp turn when comedian finds himself getting arrested for a crime he never committed all under evil strategy of a politician. Comedian’s wife and a little son feel guilt and embarrassed thinking of it as a criminal. Comedian later decides to get out of the circumstance by using his presence of mind and proving himself as a hero in front of his family.

The cast of the film Sanngto Aika includes Sachin Pilgaonkar, Vaibhav Mangle, Milind Shinde, Jagannath Nivangune and also Bhau Kadam. The story is full of twists and turns. The characters of movie build strong sub plots which later on connect to form a strong storyline.

Sachin is also sporting a new look in movie. Director Satish also said in his statement that Sachin likes to do something new in his every production. The actor will sport a different hairstyle alongside grownup beard and a mustache. As per the reports coming in from the crew of the filmmakers, the actor was reported to look great and fit into the characters role with the new look. Sachin has directed 21 films out of which 19 are jubilee hits. This time, the director stats he is eying from another hit.