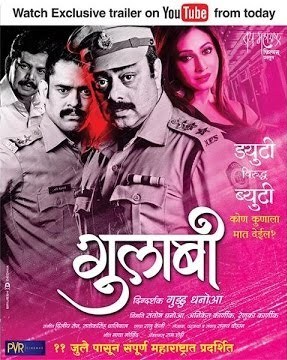 Plot : Gulabi is the Marathi film which focuses on the issue of dance bars. Dance bars are said to be a bad spot that must be removed from the society. The film story is based on dance bars and its employees as they face negativity from the society which wishes to ban dance bars.
Story of the movie shows multiple dance bar employees who work hard to earn living. The story mainly revolves around a guy who plays the role of an ACP. Bhojpuri superstar Pakhi is staring in the film who plays the lead role of bar dancer in the movie. Pakhi is the direct victim of dance bar and the system which governs its employees. It is a must watch movie for people who like films that are focused on real life issues.
Other stars in this movie are Vineet Sharma, Kaajal Vashisht, Vinay Apte and Jaspal sandhu. The film has been directed by Guddu Dhanoa. The film will be on screens on 18th of july 2014. The film has been shot within country on various different locations to provide best cinematography. The movie consists of many scenes full of action mainly for the ACP’s character.

The Gulabi shows struggle between the characters who work at dance bar and at the same time bear negativity of society. The issues shown in this movie are quite real as various case similar to this matter are filed and still running in court in the Indian court houses. The ACP is held responsible to maintain law and order in society. ACP also faces tough struggle to keep the bar employees protected from various goons that come into bar. The bar employees are also protected and fall under law. It is an interesting story to watch for.