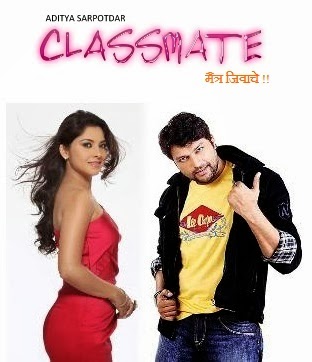 Directed by Aditya Sarpotdar, the film Classmates is the upcoming Marathi movie that will remind you back of your college days. Acting in this movie stars are Ankush Choudhary, Sonalee Kulkarni, Sai Tamhankar, Sushant Shelar, Sachit Patil and many others. The film story is written by Kshitij Patwardhan. The movie is of drama and romance genre with some music and suspense.

The story plot of the movie revolves around a group of young college students. These students study together at TYBA. The film is packed with young talent. The film has been directed to provide utmost entertainment to audience with insane fun and friendship stories. The young college grads also fall in love bringing in some romantic scenes and musical tracks to keep you entertained throughout the story.

Years pass by as the young students grow up and complete their education. It is interesting to watch how life of these students turns out to be as they take their life shaping decisions. All of this happens in few years they spend in their college studying and having fun together. Being classmates of each other during college days, it makes it interesting to watch if the group keeps its friendship value as it was during the college days.

The film will release on 31st of October 2014. The film has been shot at S.K production film house. The film has multiple music tracks in between the movie scenes. The storyline of the movie is quite simple and easy to understand. The film is kept short of length but with high value of entertainment. Aditya, director of the movie, as per his media statement is making necessary modification in screening so the viewers can get ultimate visual experience while watching the movie for quality entertainment.