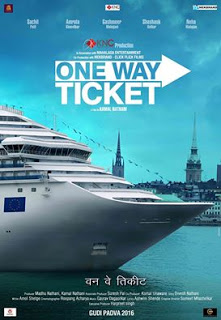 This year you have the debut venture of Kamal Nathani called One Way Ticket releasing this year though the date is still to be decided. The film is also produced by Kamal Nathani and his wife Madhu Nathani under the banner called KNC Production in association with groups like Mahalasa Entertainment and Mekbrand – Click Flick Films. The film has Shashank Ketkar, Amruta Khanvilkar, SachitPatil, Gashmeer Mahajani and Neha Mahajan in the lead and supporting roles. The film has been shot at a number of overseas locations including Europe (Italy, Spain and France) along with places like Thailand and Mauritius, which is a rare event in any Marathi film.

Recently the makers of the One Way Ticket has released with its teaser, which clearly indicated that they have gone out the way to make the film unique in M Town. The songs of the film like Befiqir have the voices from singers like Apeksha Dandekar and Rohit Raut, while the music of the film is given by Gaurav Dagaonkar, while the same was played for the invitees. The makers of the film have confirmed that they are planning to launch the film in a big way. Now, let us wait for the same to catch till then you keep on visiting at our site to get the latest updates from the M Town films only at JustMarathi.

Previous Sairat Marathi Movie
Next Catch the teaser of Cheater