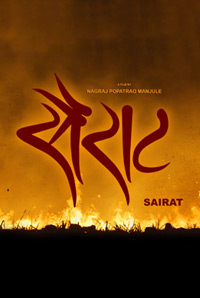 Synopsis: Unfortunately not much is known about this film despite the fact it has a decent buzz in the media. Thanks to the number of applauds the film is able to draw at Berlin International Festivals last year. The film has the music by the duo composers – Ajay and Atul, which is directed by the talented and award winning filmmaker – Nagraj Manjhule. The filmmaker has still to release the details of the star cast though it has released the teaser of the film with few men in black avatar in a cartoon animated picture is running away from the fire. One can expect a decent film as the director is known giving some good movies and his previous film Fandry bears testimony to this. Hence expecting a good content from the film Sairat is obvious.

As per the insiders, he would be seen in some of the sequences along with his friend in police officer role. Though the film was to release on 1st January 2016 but owing to the reason that the film was lined up the international film festival and hence the delay was inevitable. The story comes from the director himself, while the dialogues have been penned down by Nagraj Manjule and Bharat Manjule and cinematography is being carried out by Sudhakar Y Reddy. The art director of the film is Santosh Sankhad and make up is carried out by Sameer Kadam. Stay tuned to know more about the film before it releases on 25th March 2016.