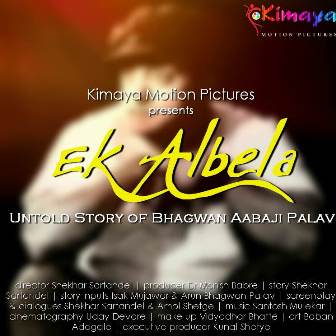 Synopsis: Ek Albela is a classic biopic film, which showcases the period of 1930 and 1951, which can be called as the transition period of Cinema in India. The film is directed by Shekhar Sartandel, while it is produced by Dr Monish Babre under the banner of Kimaya Motion Pictures. The actors including Mangesh Desai as Bhagwan Dada, Vidhyadhar Joshi, Prasad Pandit, Swapnil Rajshekhar, Vighnesh Joshi, Shekhar Phadke, Shriram Kolhatkar andArun Bhadsavle are seen in the lead and supporting roles for the film. Interestingly, the film also has the famous B Town actress Vidya Balan who is making a cameo or special appearance in the film with a character known as Geeta Bali.

Ek Albela can be called as the classic journey of a man who came in the industry without any godfather and soon establishes his niche in the industry and soon becomes a legendary actor in the film industry.  Most of the dialogues of the film are found in Hindi while in some of the songs of the film you can find Bhagwan Dada in it. The film is a biopic, which is all set to release soon. The director Shekhar Sartandel seems to have a hat with different feathers in it wherein he is not only a filmmaker but at the same time given the story, screenplay and did other jobs. The initial promos and the film teaser released last month for the film has created a good amount of buzz for the movie, which is likely to do wonders.