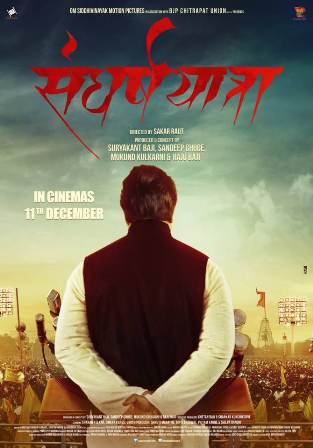 Synopsis: The film Sangharsh Yatra is a biographical film of the late leader Gopinath Munde the member of political party Bhartiya Janta Party (BJP). Intially, the film – Sangharsh Yatra was supposed to hit the theatres on 19th February 2016, however, it is delayed its release due to technical reason, while it is ready to release and would hit the theatres soon. The biopic is directed by a known actor called SakarRaut, while the actors include Sharad Kelkar, Omkar Karve, Girish Pardeshi, Shruti Marathe, Dipti Bhagwat, Shilpa Gandhi and Pritam Kagne who play their roles in the lead the supporting roles in it.

The film’s first look and teaser have been applauded by the audience a lot. And looking at these, one can get convinced that the lead actor Sharad Kelkar has done the justice while playing the character of the political leader of BJP who lost his life a year back while he was returning Mumbai from Delhi. The film showcases the life of the leader of the state GopinathMunde and the struggle he has done to uplift his state and its people. Sharad while playing his character has more or less resembled a lot in terms of body language, style and dialogue delivery of the said leader. You stay tuned to get the updates about the film.

‘Halal’ s unique subject is inviting heed of one and all