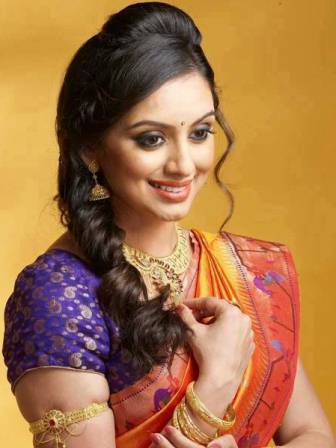 Shruti Marathe is a popular Marathi actress who hails from Pune city. She was born and brought up in Pune and has worked in Marathi and Tamil movies apart from seen over the Marathi TV series. She is more popular with the pet name of Shruthi Prakash than Marathe in the film world. After her schooling and college from Pune, she headed to Mumbai to pursue her dreams. There she got the chance to work in small screen and then headed to big screen for Marathi and south Indian films. Now, let’s dig in her life to explore more about herself in the following sentences.

Shruti’s journey in Marathi Cinema started with the film called Sanai Choughade, which was produced by the talented actor Shrevas Talpade. She then got the chance to do South Indian films and her first Tamil film was Indira Vizha. In south Indian movies, she got the stage name as Hema Malini, which she decided to change on request. She then got the chance to do another Marathi movie called Naan Avanillai 2 wherein she did much better over the Box Office becoming a big hit over the silver screen. She then got another Marathi movie called Guru Sishvan & Sundar C as the lead actress.

Some of Shruti Marathe Marathi movies include Asa Mi Tasa Mi, Lagali Paij, Teecha Baap Tyacha Baap, Satya, Savitree Ani Satyawam and Premasutra, etc. Some of her recent Marathi movies include Tujhi Majhi Love Story and Taptapadi. Some of her south Indian films include Aravaan, Vidiyal, Aadu Aata Aadu, etc. Apart from the big screens, she has also worked with several TV serials, which include Sant Sakhu, Peshwa and Radha Hi Bawari along with Dramas like Lagnabambaal. Besides, she is now preparing for a chance to enter the Bollywood industry.