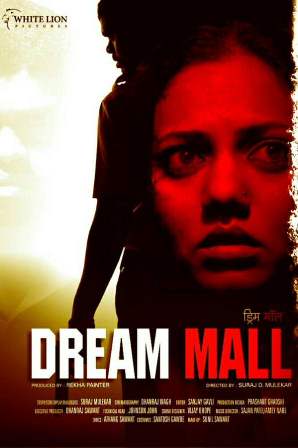 Thrill, adventure and fear; director Suraj Dattaram Mulekar has woven the story of Dream Mall around these three elements and he has succeeded in frightening you as you watch a glitzy Dream Mall turning into a nightmare for a young girl. Starring Siddharth Jadhav and Neha Joshi in lead roles, the movie is produced by Rekha Painter and has music from Sajan Patel and Amey Nare with lyrics by Dhanraj Sawant.

It is the story of a night in a mall where a young girl (Neha Joshi) gets trapped. She is scared because the security guard (Siddharth Jadhav) is after her. As soon as she reaches the parking lot, in the wee hours of the night, the psychopath attacks her, making it clear that his lustful desires have driven him crazy and he won’t spare her today. She runs for her life and tries to hide in the mazelike mall, in a bid to save her life. In the dreadful turns of events, one of her friends gets killed but the cat and mouse game continues until both reach the highway where the terror comes to an end.

A fine thriller with fine performances, especially by Siddharth Jadhav who has been mostly seen in comical roles, Dream Mall keeps you glued to your seats. You feel the goose bumps when the security guard becomes downright savage, showing his marauding mentality that is hell bent on destroying an innocent girl. If thrill and horror is your cup of tea, a walk through Dream Mall is a must. Go get your share.