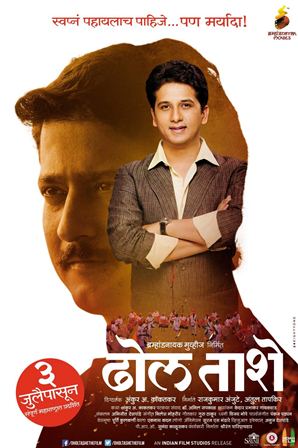 Set on the backdrop of politics and social drama, Dhol Taashe is an upcoming movie written and directed by Ankur Kakatkar. It is produced by Rajkumar Anjute and Atul Tapkir and will be released under the banner of Bramhadnayak Movies.

The film is based around a cultural activity called Dhol Taashe that encourages people to celebrate festivals in a traditional manner, free of pomp and show. Politician Aditya Deshmukh (Jeetendra Joshi) senses an opportunity in it and tries to misuse it to promote his own interest and dirty game. He does not know that he will be confronted and challenged eventually. Unknowingly, Amey Karkhanis (Abhijeet Khandekar), a boy from middle class family gets pulled into it and gradually transforms to become the leader of Maharashtra Yuve Dhol Taashe Aghadi, beating the politician at his game. Gojiree Gupte (Hrishita Bhatt) is the love interest of the young boy who also finds herself embroiled in the drama.

Director Ankur Kakatkar has chosen an interesting subject that will certainly pique the curiosity of the audience especially the youth. Very few films are made with a political subject in mind and woven around young characters. Dhol Taashe has all the elements of a gripping tale and it would be interesting to watch a tussle between the good and evil, in the modern context.

With a fine star cast, beautiful lyrics from Guru Thakur and music by the talented Nilesh Moharir, you can also expect melodious songs and brilliant performances. A must-watch, it will give you great food for thought.