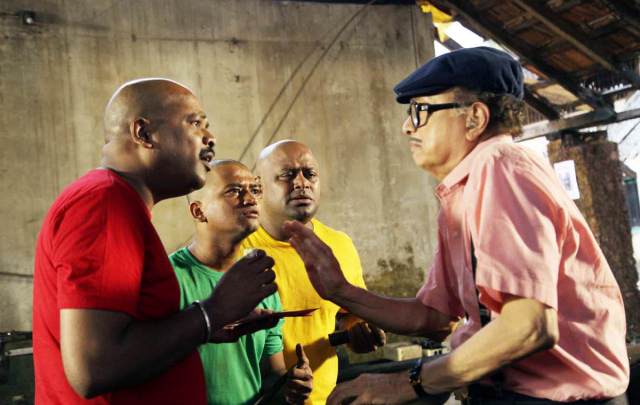 Murder Mestry , claims to be a suspense thriller, with an excess comedy that takes one’s attention from the suspense. Muder Mestry is directed by Rahul Jadhav and stars well known actors like Dilip Prabhavalkar, Hruishikesh Joshi, Vikas Kadam, Vandana Gupte, Kranti Redkar, Kamlakar Satpute, Sanjay Khapre, Mansi Naik, Devendra Bhagat. With the presence of such an illuminous star cast, the film rides high on expectations. But unfortunately, it fails to meet the expectations that it generates. The producers intended to make it a thriller with a strong touch of humour in it but the end product simply fails to accommodate the right elements in the right measures.

Murder Mystery is about a postman who has an addiction to reading the letters that he has to deliver. This kind hearted postman who takes interest in the relationships and family matters cannot do away with this bad habit of reading the letters. This gives him a sneak peek into the lives of various characters. This habit leads him to trouble as he sets out to dismantle the plan of the murder.

Murder Mestri is interspersed with comic sequences here and there but there are only a few occasions that make you laugh your heart out. Also the angle of thrill and suspense is weak. At times the whole framework of thrill looks absurd. The very concept of a postman reading letters looks outdated in this era of SMSes and Whatsapp. The concept fails to grip you and that makes all the affairs ineffective.

Performances by the leading actors Dilip Prabhavalkar, Hruishikesh Joshi, Vikas Kadam, Vandana Gupte, Kranti Redkar, Kamlakar Satpute, Sanjay Khapre, Mansi Naik, Devendra Bhagat are powerful and that may qualify to be the only plus point in this movie. Comedy sequences are laughable only because the actors pull off the scenes with perfect timing. The main culprit is the script that makes even the serious look absurd. When the climax is resolved it is absurd and ridiculous.

There is nothing in the movie that can convince you or give you a good time of enjoyment. If you are not a fan of the leading actors it is better you stay away from Murder Mestri.