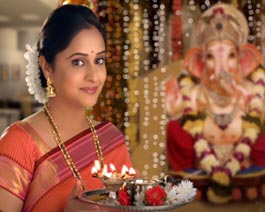 Marathi celebs are promoting eco friendly Ganesh Chaturti this festive season. Mrinal Kulkarni goes an extra mile and learns to make eco friendly Ganesh idols. She recently posted a pic of hers on the social media to spread awareness. Mrinal whose periodic drama , Rama Madhav released last month is a great devote of Lord Ganesha and celebrates the festival with fervor every year with her family. The actress, who has come forward for social causes even in the past, promotes making Ganesh idols at home with Shadu clay. Mrinal was a favorite among children during her show Son Pari on Star Plus. Her step will surely attract children and inspire them for such environment friendly causes.

Mrinal was quoted as saying, “Ganesh Chaturti is a festival of enthusiasm and celebration . But it is also important that you keep the environment issue under check. Every year we urge people to buy nature friendly Ganesh idols, but this year they have a whole new option which is to make the idols at home like I did. “

The 50 year old actress who recently directed her second film Rama Madhav said that she would thank the Lord of Wisdom for its success. And she will also pray for peace and harmony in every one’s life.