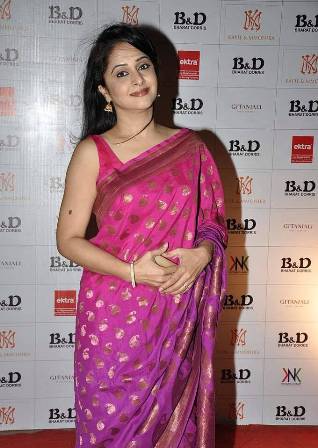 Mrinal Kulkarni caught every child’s fancy when she became Son Pari on star plus. Mrinal , who had appeared in various Marathi and Hindi soaps in past, became the fairy of a little girl named Fruity and solved her problems. She was adored by children but no loss did the grown ups appreciate her charming presence on screen. Thereon the glittering Son Pari of television has captured many hearts with her spontaneous  acting  and sprightly smile. In the year 2014, the actress nearing her fifty, came up with her grand directorial venture titled Rama Madhav , a poetry on celluloid about the historic reign of Peshwas.  Mrinal who was fascinated by history since a young age, her grandfather being a historian , marveled everyone with the intricate portrayal of the historic drama . She herself has acted in a historic drama named Swami on Marathi television in her early years in acting.Mrinal has bequeathed her penchant for art and cinema from her mother who is the daughter of the renowned Marathi author, Gopal Nilkhant Dandekar. She has also been a part of few Hindi films . She has acted in a vital role in the historic saga Veer Sarvarkar. Over the years the actress has impressed the audience with her charming motherly personality alongwith her gifted panache for acting. Not only does she is a familiar face in the Marathi films but also a favorite among the Hindi viewers.

Wiki : She has been the face of many historic and mythological characters like Draupadi and Meera on the small screen. Recently for a Hindi serial , she experimented with a negative role along with Pankaj Dheer. The role received moderate response from viewers.

She played the character of Meerabai on the national TV with a scintillating sobriety and mysticism. She is one of the popular actors of the Hindi television that has given it its enduring face with the serials like Shrikant ( Marathi) and Swami and Meerabai. In the year 2012, Mrinal got into the shoes of a director with her first directorial venture Prem Mhanje Prem Mhanje Prem Asate. In the film, many stalwarts of Marathi films came under the same roof, namely Smita Talwarkar, Sachin Khedkar, Pallavi Joshi and many more. The film succeeded in its cause to touch everyone’s heart and Mrinal as a director received much appreciation. Rama Madhav which is her second film as a director has also been received warmly by her fans and audience.