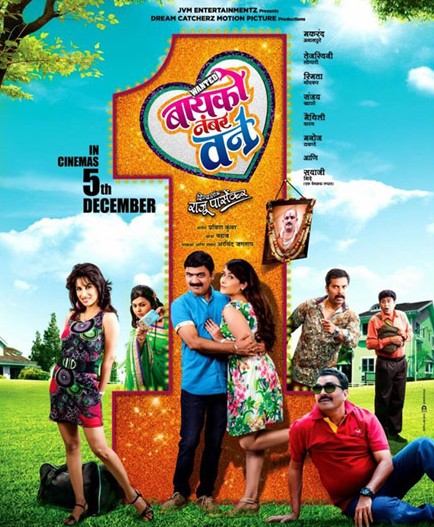 It is amazing to watch a regional film industry gradually coming to prominence. Marathi film industry has become a gold mine of talent for people who are creatively inclined and has a lot to contribute to cinema. Where in one hand we can see the popular film industries trashing box offices with lurid tastes of audiences every week, quality content in Marathi cinema is providing some relief to people who understand and appreciate the art truly. Different genres are explored every year and currently Marathi industry’s anticipated offering is going to be the comic flick Wanted Bayko Number One. The release date of the movie is 5th December 2014.

Popular Marathi actors Makrand Anaspure, Smita Gondkar, Sanjay Khapre, Tejaswini Lonari, Maithili Warang, Manoj Takne and Sayaji Shinde will be seen in the movie. The movie has been directed by Raju Parsekar and produced by R. Arora. Written by Arvind Jagtap, music for this movie has been composed by Pravin Kuvar. Nothing much has been revealed about the story or the plot of the film and people are still waiting to get more information before they book their dates. Heavy promotional campaigns are been designed in order to attract attention to the movie. The biggest Bollywood stars are also taking interest in promoting Marathi movies which is why a section of Bollywood-watchers are gradually becoming loyal Marathi audiences.

Till further information is being revealed about the movie, fans will have to watch other movies before December. Content of Marathi cinema is greatly being praised today and fans of the lead actors are having high expectation from the movie already. The fact that Marathi cinema is very much rooted to its background and culture, is been appreciated by people galore. Wanted Bayko Number One is sure going to be another to watch out for.