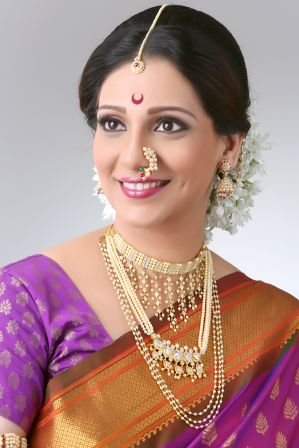 Madhura Velankar is a known name in Marathi Cinema and is regarded as the top names in M Town lady stars. She was born on 8th October 1980 in Pune. She did her schooling and college from Pune itself and since her college days she was linked to a number of theatre groups and tried and learning acting skills.

After completing her education, she continued working in theatres and some of the popular plays include Kadhitari Vedyagat in 2009 and the next was Lagnabambal in 2011 followed by another play known as Mr & Mrs working for the character of Meera in 2013. Soon she got the chance to work in small screen.

With smaller roles in some TV shows, she then got the chance to work in Marathi movies starting with Sarivar Sar, which soon followed by another called Khbardar. She soon got a slew of other films including Matichya Chuli, Mi Amruta Bolatiye, Aai No. 1, Not Only Mrs. Raut, Sarivar Sar, Khabardar (2005), Ek Daav Dhobi Pachhad, Rangeberangi, Guilty, Uladhaal and Gojiri to name a few.

Some of her recent Marathi movies include Ashach Eka Betwarar, Jana Gana Mana, Paulwaat, Haapus and Canvas to name a few. As far as her personal life is concerned, she is married to Abhijeet Satam, while she lives in a joint family having his father in law and others in the group.