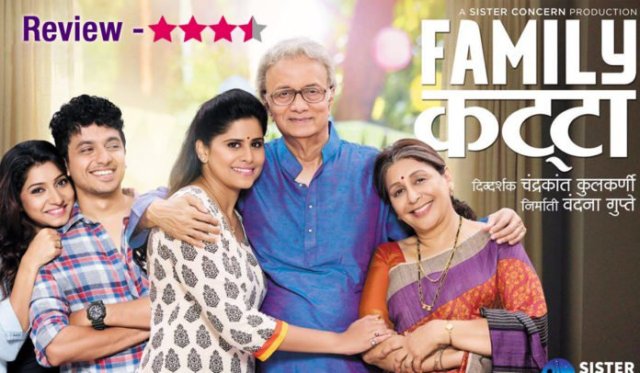 The story Analysis: Family Katta as the name suggests is based on the theme of family members reuniting not only literally but at the emotional level. An elderly couple who is nearing their 50th marriage anniversary is disturbed by the fact that their four children have fallen apart due to differences between them. As they think of a way to bring them together and resolve their differences, they plan a party and reunion on their 50th marriage anniversary. The scenes in the film take place within a span of merely two days: the day of the reunion and the previous day of preparation. How and to what extent does the old couple succeed in their plan? That is what you find out in Family Katta.

The Performances : The elderly couple Mr and Mrs Sabnis played by Vandana Gupte and Dilip Prabhavalkar is exhilaratingly refreshing. It is unbelievable how at such age, the veteran actors bring so much depth in their performances that I would suggest you watching the film just to see their subtle and powerful performances.

Sai Tamhankar plays one of the daughters of the family form whom the other members have kept a distance since she married her classmate years back against the wish of the family.

Alok Rajwade and Gauri Nalawade are the children who are influenced by modern ideas and have almost given up old good values.

Direction, Production and Music : Famil katta is produced by the actress Vandana Gupte herself. In av recent interview she revealed the subject was close to her heart and she wanted to see the story transpire onto screen with a talented cast. Well, her evidently her dream has come true.

Family Katta is definitely not free from loop holes. The first fault is with direction. As Chandrakant Kulkarni is the first time directed his inexperience becomes evident in the comic scenes which required lot of ingenuity. What comes second is the music. Although the songs are not bad we wish there was more depth in the music as there is potential in the story for such music.

Final Verdict: Family Katta is definitely a treat for mature audience. But it can be enjoyed by youngsters too. But the packaging of the film is not something that would be attractive to the youngsters. It might just fall short of the expectations.