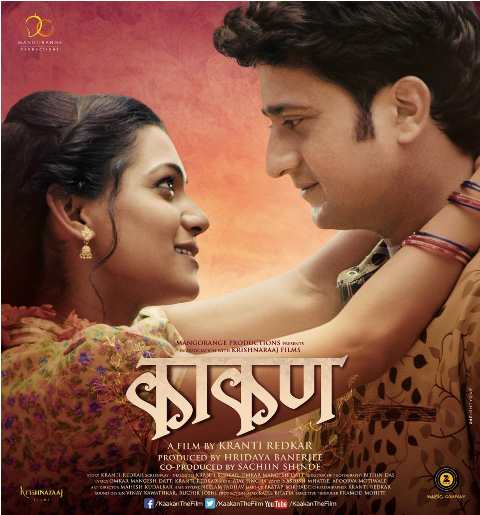 Kaakan is a period drama and a love story that tells the story of innocent and guileless love. Set in the period of 1970s, Kaakan portrays two young hearts that fall in love but separated by the stringent rules of the society. The girl belongs to a rich family and the boy to a poor one. Their initial separation and reunion in the end is tale of interesting twists and turns.

Kranti Redkar is the director of Kaakan in which Urmila Kanetkar Kothare and Jitendra Joshi play lead roles. Kranti Redkar , who is an established actress in Marathi Cinema , has forayed into direction for the first time. She is not the script writer but the director and choreographer for the film. Sudhamati and Kishu , played by Urmila Kanetkar Kothare and Jitendra Joshi respectively , are lovers in a village in the 1970s. Separated by circumstances, fate brings them face to face once again in life after 32 years. Sudhamati had moved on to city life but Kishu had suffered heart break and rejection for all these years. The lovers of the past meet again after 32 years thanks to a 12 year old friend of Kishu named Gopi , played by Ashutosh Gaikwad. Married to an illustrious business man in Mumbai, Sudhamati still rememebers her old love with Kishu.

Kaakan is tale of love blooming in adverse circumstances. Kaakan is about powerful performances by the lead actors. Urmila Kanetkar Kothare and Jitendra Joshi have brought out their best. Urmila is powerful in her expressions and beautifully portrays the transition of the character of a village girl into a mature lady. Jitendra Joshi is impact in his role as a jilted lover. But there is one more person who wins hearts with his performance. It is the child actor Ashutosh Gaikwad who does a splendid work of a mediator between the lovers.

Music by Ajay Singha is an intrinsic part of the film and gives a beautiful portrayal to the tragic love story.

Kranti Redkar , whose brain child the film is , does a splendid work of inception and execution of the script. In her own words, the film is similar to the Hindi hit Ek Dije Ke Liye which is a tragic love story. Kranti, as she says , was fascinated by tragic love stories and so she worked on this one and even went ahead to direct it to see it come live on the screen as she envisioned it.

Kaakan is a worth watching for its touching story and powerful performances.