Umesh Kamat plays the lead role in “A Paying Ghost” 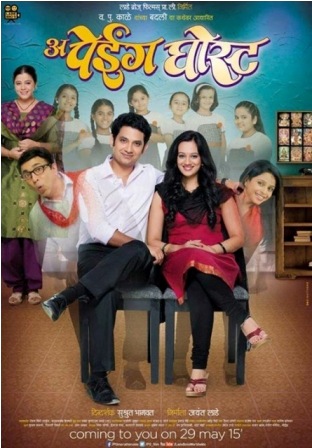 A horror film is not always about just horror. It can be also be about humour. Umesh Kamat starrer “ A Paying Ghost” is a great blend of humour and horror. The film is set to release by the end of this year and is a terrifically atypical film with streaks of fun and laughter but also thrill and horror.

Accomplished actor Umesh Kamat plays the lead role in the film whereas Spruha Joshi, Pushkar Shroti, Sharvani Pillai portray other significant characters. The film is replete with special effects and has oodles of post production work. Umesh was recently quoted as saying that it was a special and different experience for him to shoot for a film which had special effects. The actor who is also a well known theatre actor is happily married to Priya Bapat who is also an accomplished actress in the Marathi industry.

The film has an interesting title, A paying Ghost, and is about more than one ghost haunting the house where Umesh and Spruha’s characters try to reside. The conflict and fun and the horror that the presence of the ghosts ensues is the story of “ A Paying Guest”.

Umesh had recently given a splendid performance in the Bal Thackeray Biopic, BalKadu, earlier this year. Now once again he will be seen in an interesting role. He is paired with Spruha Joshi for the first time.