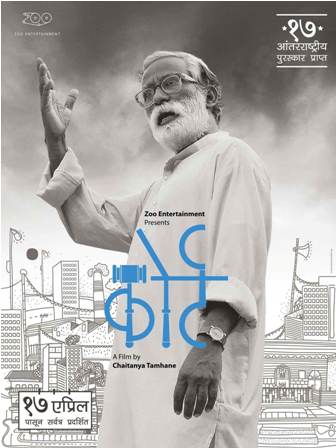 Court is a film directed and written by Chaitanya Tamhane who is debuting as a filmmaker from this movie. The movie is actually a courtroom drama and it is going to be released in various languages. Film has received a variety of awards like National Film Award and Golden Lotus Award. Court will be released in the languages like Hindi, Marathi and Gujarati including English.

The story of the film revolves around an ageing singer who stands in the court for his trial in Mumbai. Movie assesses the Indian Legal System and details the life of people associated with legal processes in India.

In the lead role Vira Sathidar plays the role of Naryan Kamble the singer who is arrested for his inflammatory song that led to the suicide of a sewerage worker. . Film is receiving glowing reviews not only in India but all across the globe. The attention to details and the realism regarding the courtroom system is well appreciated by the viewers. Movie displays the proceedings of the court including the life of the players involved in courtroom.

Court depicts the daily life of an ordinary Indian and thus the viewer should be able to relate well with the movie. The premier of the movie took place in 71st Venice International Film Festival in September 2014 where it also received two awards. The movie is releasing in India on 17th April and it falls in the category of most awaited movie of the year.