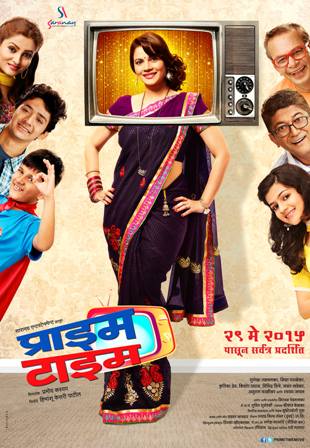 Prime Time presents a light hearted comedy for the audience

Prime Time is a movie which is soon going to be released in the month of May. The release date decided for the movie is 29 May 2015. Part Time is a pure comedy movie that is going to tickle the audience with its core humour. The movie is produced by Himanshu Kesari Patil and it has been directed in Saranay Entertainment Studio.

The director of movie is Promod Kashyap who is a well renowned name in Marathi Cinema. Shubhrojyoti Guha is the writer of the movie Prime Time and the script of the movie is a strong plot that hypnotizes and enthrals the heart of the viewers all through. Editor of the movie Shrikant Kelkar has done some amazing job in terms of a finer editing for the film.

Prime Time is a story about a girl named Vaishali Apte who is deeply obsessed with the television World. Her small Maharashtrian family is also worried about Vasihali’s bizarre fixation about television. Her fascination for Television takes her entire family for a roller coaster ride of fun, adventure and thrill that eventually makes the entire family understand the value of true relationship. It is a pure comedy movie which is created for the family audience. The light hearted comedy presented in the movie can offer a good fun-time to its audience.

Dialogues and Lyrics of the movie are captivating and written by Prashant Shantaram Jamdar. Background score and music is managed by Niranjan Pedgaonkar.