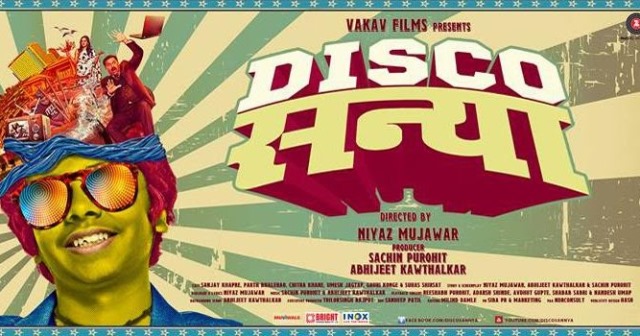 This Friday you have a solo release in M Town, which comes in the form of Disco Sanya. The film has Parth Balerao, Chitra Khare, Sanjay Khapre, Umesh Jagtap, Suhas Shirsat and Gauri Konge in the lead role. The film is directed by Niyaz Mujawar who is also the writer of the story along with carrying out the job of screenplay for the movie. The director of photography is Sandeep Patil, while the movie is produced by Sachin Purohit and Abhijeet Kawathalkar under the banner of Vakav Films. The title of the song has already created a kind of curiosity among the Marathi audience; let’s check inside the film to get the crux of the same as under:

Disco Sanya is a film having a street vendor with the same name who is known for the heart of gold who is seen irritating both the audience and people round him. The portrayal of kids over the screen is a job, which requires fine tuning. The film has too subtle in nature but the impact could suffer a lot with characters lacking the sympathy. The film Disco Sanya falls under the latter category. Parth Bhalerao who is playing the character called Sanya has achieved a right blend of heartfelt honestly along with street smart arrogances found in the role of Bandya. Remember his role in Killa, it has achieved loads of applauds for the same. Ironically the much of innocence of the character is seen getting lost over Sanya over the loudmouth trickster.

Other than having the largely and brattish kind of central character, the other issues with the movie is seen in its balance. With the kids around, the feel good message makes it a pleasant movie to catch however with much of the black comedy in it you never know when it becomes the serious drama. Both the male leads Sanya along with the businessman Shreyas Kale are simply no to the good for a number of movie and their involvement in the activities can lead to less amount of irritation to serious crime making things difficult.

On the other side, you find Kale to be an arrogant businessman who is seen refusing to think beyond himself while he doesn’t really care regarding immediately family. In his bad mood, he is seen assaulting Sanya at traffic signal, which makes him reveal his secret hideout. Thus this all makes the Tom and Jerry kind of chase but things are seen over the real world where the jokes aren’t that funny. The film wants to boost up the puns but it sacrifices a majority of the logic in doing the same. Why for instance would any rich household including Kale ever think of serving the burgers.

It is interesting to see the way a street kid is tried to reform into a high end household adopting a number of other films including the one called My Fair Lady and Pygmalion. Rather, you can find the top comedy for the outlandish demands of Sanya and the irrational attempts of Kale to get away from him. You can find a couple of inconsistent dialogues that are seen moving in the policy, which do not allow the character backgrounds into consideration and thus settle down things marginally. The climax of the movie has tried to explain a couple of things that Sanya has tried to portray in a better way but it is impossible to discuss it without actually giving the critical plot pointing away.