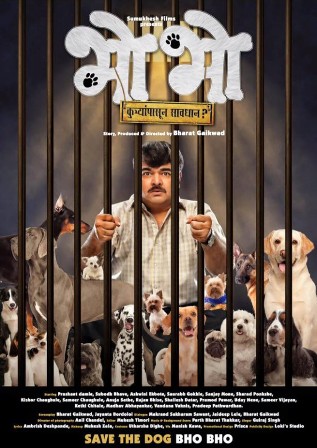 The upcoming film called Bho Bho by Bharat Gaikad happens to be a thriller and mystery. The film is produced under the banner of Sumukhesh Film, which is written by the director himself. The film has the star cast of both lead and supporting actors including Prashant Damle, Sharad Ponkshe, Subodh Bhave, Ashwini Ekbote, Sanjay Mone, Saurabh Gokhle, Anuja Sathe and Kishor Chaughule. The film is a suspense thriller, which is presented with added amount of humor in it. The film has all the elements, which can entertain the audience. After getting all round of applauds for the Hindi and Marathi TV serials, the director is doing his debut in this film. The film is likely to release the theatres very soon and would therefore hit the theatres.

The story of the film is a fictional thriller and is all about a woman who is seen staying in Bombay and then passes away due to her dog. This simply causes the police to start the investigation process in order to find out about the mysterious death of the lady. The way Prashant is seen meeting an accident in her house during the police investigation is seen changing the course of the storyline is simply worth exploring when the film finally hits the theatres. So, find out why any pet dog would ever kill his owner.