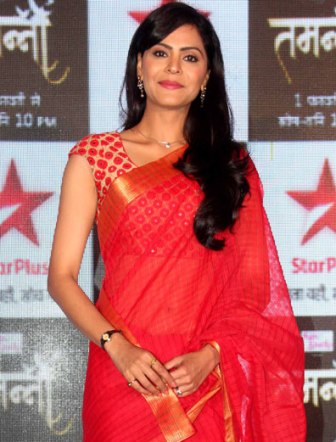 Anuja Sathe is a popular name in M Town. She was born on 8th October 1987 in Pune. She did her schooling from Jnana Prabodhini Prashala, Pune. She spent her childhood mostly in the traditional Puneri Wada and did her schooling and college from Pune itself. Since she was active in cultural activities she was attached to various theatre groups doing a couple of popular Marathi plays. Soon she got the chance to do Marathi serials starting her professional acting career from small screen with Agnihotra the Marathi TV show aired at Star Pravah in 2010. Since then it was no looking back as she got a couple.

Some of these include Mandala Don Ghadicha Dav, Lagori Maitri Returns and Visava – EkGha r Manasarkha to name a few. Currently she is doing another TV show called Tammnna aired on Star Plus, which is a Hindi serial. Asa Mee Ashi Tee in 2013 followed by a couple making a household figure on the small TV in the Marathi world. Soon she got another TV serial called Raakhandar wherein she played the character of Madhavi. Then she did BhoBho  in 2014, Ghanta and Coffee: Ani Barach Kahi. She also got a  B Town movie in 2015 called Bajirao Mastani wherein she played the character of Bhiubai. She was applauded for her M Town films as well for Anuja Sathe’s performance, while talking about her personal life, she is married to Subash Gokhale in 2013.