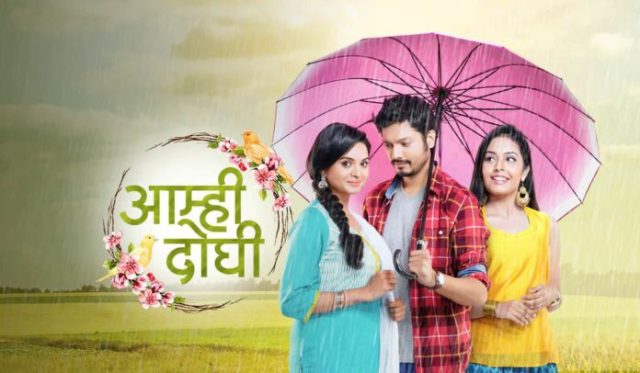 Director –  Umesh Namjoshi
Star cast – Shivani Rangole, Khushboo Tawade, Satish Pulekar
Producer – Vidyadhar Pathare
Production Studio – Iris Production
Story – Vividh Babali Korgaonkar
Screenplay – Rohini Ninave
Dialogues – Prabhanandini
Cinematography – Sachin Ramchandra Rajwilkar
Channel – Zee Yuva
Starting Date and Timing – 25 June 2018 Monday to Saturday at 08:00 pm
Release Date – Coming Soon
Synopsis: The Marathi TV world has much to showcase in the list of TV serials to be aired in the coming time. This time we have the popular TV channel called Zee Yuva embarking upon a new TV show called Aamhi Doghe . The movie is directed by Umesh Namjoshi, while it is produced by Vidyadhar Pathare made under the banner called Zee Yuva. The star cast for the film include Shivani Rangole, Khushboo Tawade, Satish Pulekar who would be seen in the lead role. The Story has been jotted down by Vividh Babali Korgaonkar, while the Screenplay is carried out by Rohini Ninave whereas the dialogues are carried out by Prabhanandini and Cinematography is carried out by Sachin Ramchandra Rajwilkar.
As said, the cast of the TV serial that include the senior actor Satish Pulekar and actresses Shivani Rangole along with Khushboo Tawade. And both the actors will be portraying the two poles apart the characters in the TV serial. Just like the two real siblings they are playing one of them who got to be more mature than the other and then seems to take care of the other. The title of the show in a sense talks a lot about it. Talking about the other aspects of the show, the assistant director is Kedar Salvi, while the Creative Head happens to be Mrunalini Chokrande whereas the Creative Producer happens to be Vividh Babali Korgaonkar from Iris Production. The Project head happens to be Manish Dalvi while the Editor is Pitar Gundra and Vinod Gupta and the Online Editor – Ganesh Gupta. The makers have released the promos that is getting a decent buzz in the media. Stay tuned to know more about this show and others only with us.