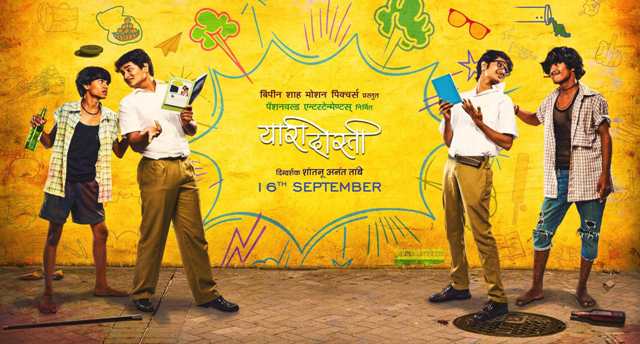 Yaari Dosti is about four boys, two from affluent families and two from slums coming together to study. What sets them apart and what makes them click that is the story about. Despite of their differences, they join each other as friends and share love, sorrow and laughter. The movie is portrayal of school life where assumptions and ideas galore while teenagers still try to make sense of the world of the elders. Yaari Dosti is directed by Shantanu Anant Tambe and Bhavana Bipin Shah, Sarika Vinod Tambe are the producers. Music is by Pravin and Manoj. It is different from recent teenage films but not exactly a delight to watch.

The Story: Shantanu Anant Tambe directed Yaari Dosti is a school or teenager movie which touches the subject of inefficient education system of our country. Children from all backgrounds do not get equal opportunities for education. It is the qualification on paper that matters not the real creativity of a child. Well that sounds quite familiar as films like 3 Idiots have already dealt with such themes. But Yaari Dosti is not only about this. There is an attempt to explore love and friendship from the perspective of teenagers. The atmosphere of school, its pressure and fun all goes down well in the movie. Teenage love and its hiccups, it is interesting to live those things again. Yaari Dosti takes you back to your school days with all its confusions, drama and curiosity.

Performances: If only the performances were good! That is what comes to your mind after watching Yaari Dosti. Although the chemistry between the friends the individual performances are below average. To make an enjoyable film, the actors should look believable and natural. That is what the film lacks. With a potential script and screenplay there is need of the characters to come alive. That does not happen in Yaari Dosti. The film remains an amateurish attempt. The planning is fine but the execution is poor in Yaari Dosti. The boys Hansraj Jagtap, Akash Waghmode, Ashish Gaade and Sumit Bhokase are merely average. Mitali Mayekar is the love interest of one of the boys, she is pretty and pleasing. Sandeep Gaikwad, Manisha Kelkar, Janardan Singh, Namrata Jadhav, Nisha Parulkar , Ashok Pavade and Nazneen Qureshi are all average performances. None of them really stand out. Cinematography by Raj Kadur is average.

Music and Lyrics: Pravin and Manoj, the music directors have failed to deliver music that will last long in the memory of the audience. The background score is rather poor and barely contributes to make the film any interesting. Plus, the songs fail to catch up with the listeners. The lyrics by Santosh Khadse and the director himself Shantanu Anant Tambe lacks sheen. Singers Avadhoot Gupte and Pravin Dhone are pleasing.

Direction: Shantanu Anant Tambe has brought out an average film that is partly enjoyable despite of its loopholes.

Marathi Actors with Passion besides Acting