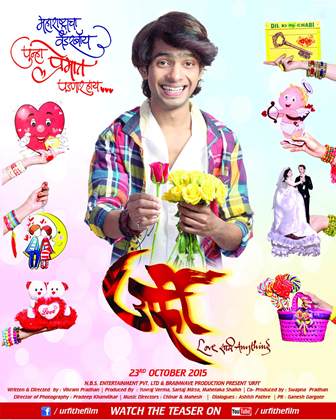 The Marathi movie Urfi is gearing up for its release this month end. The film has Prathamesh Parab and Mitali Mayekar in the lead roles, while Upendra Limaye, Kavita Lad, Milind Phatak and Uday Sabnis are seen in the supporting role. The film is directed by Vikram Pradhan, while it is produced under the Banner of NBS Entertainment Pvt Ltd. The music and lyrics are from Chinar-Mahesh and Mangesh Kangane respectively. The film falls under a romantic thriller. The film revolves around the life of a typical topri kind of guy called Deva played by Prathamesh Parab. He is tied up in all sorts of goon activities, however, when he falls in love, you find certain transformation. He is seen doing all the things to woo the girl.

The film is expected to hit the theatres this month end on 27th November. Though it was scheduled to release earlier last month in October 2015, however, with the delay of one month the film is back on track. The promos seem to be impressive and have created some amount of buzz in the Marathi circles. Let’s see how things roll for the movie, but right now, the countdown has begun till you finally catch the film in the theaters.