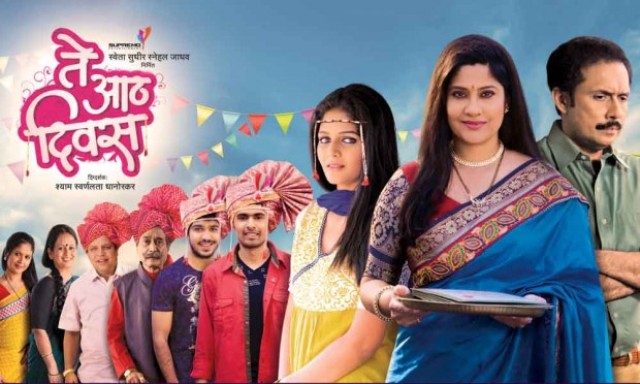 The Marathi Movie – Te Aath Divas (Those Eight days) was released recently, which is directed by Shayam Dhanorkar and produced by a slew of people like Shweta Snehal and Sudhir Jadhav under the banner of Supremo Entertainment. The film has Renuka Shanane, Tushar Dalvi, Aroh Velankar, and Deepali Muchirkar in the lead roles, while the actors like, Atul Todankar, Sunil Joshi, Avinash Masurkar, Abhilasha Patil , Meena Sonavne  and Ashutosh Gaikwad are in the supporting roles. The music comes from Vikas Bhatavdekar, while the playback singing is carried out by Shailaja Subramaniam. Now, let’s have a look at the film and get the crux of the same.

The plot of the movie is seen revolving a typical Maharashtrian family who is a big joint family. In a family, you find the preparation for a wedding is going on for a young girl, people are busy meeting the schedule since it has to be finished within ten days. The would-be bride is Deepali Muchirkar and the would be groom is Aroh Velankar. The boy is too eager to marry this girl, while she loves on of her friend. In the same family you have a selfless lady who is the mother of this would be bride who comes from the USA to attend her daughter’s wedding. She is the same woman who left her home long back to pursue her career in the US. And she realises that the wedding is against the desires of her daughter, she decided to help her. So, what happens next, how the eight days before the marriage unfolds for the girl and the family is interesting to catch in the film.

One of the USP of this movie is that it caters a clean and healthy family entertainment, hence can be called as a must watch. You can find a couple of light humour based sequences along with the emotional ups and downs witnessed in the film. Though at times the film seemed going slow, however, the very next moment it becomes fast, making the audience confused about the same. Yet at the end things change and settles down, which is interesting to catch. Though the film seems to be a family entertainment yet is showcases the dysfunction as well, which challenges the family values, which the Maharashtrian culture is interwoven.

Now, talking about the performance, let’s start with Renuka Shahane, she is more known for her smile, however, we missed it here. Thanks to the kind of character she is playing in the film. She is a selfish mother who leaves a small baby of years for the sake of her career and flies to the US, while returns only after when her daughter is getting married. Hence at such junctures, you cannot just get to catch the smiles of this lady. Talking about her performance it was incredible in the movie. The newbie Deepali Muchrikar who played the character of the confused daughter called Prajakta too impressed her with her debut performances, while Aroh Velankar the ‘Rege’ fame young actor though had a less screen presence but he left no stone unturned to showcase the kind of maturity, the character demanded unlike seen by any versatile actor. Also, the other actors in the lead and supporting roles too were seen par with the required demands of the characters.

The film talks about certain dysfunctions in a big joint family but all these came along with a subtle social message at the end. Thanks to the best good performances of actors like Renuka Sahane and the debutant actress and decent direction, the film managed to survive with a story for the audience. Talking about the other elements the film seemed okay in terms of music, direction, and screenplay and editing making it a subtle family entertainer. Thus one can expect a better rating for the film.