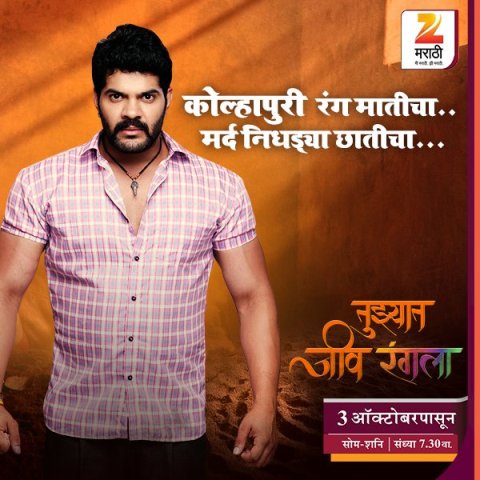 Soon the Zee Marathi Channel will have its new TV show called Tujhyat Jeev Rangala, which has Hardeek Joshi and Akshya Deodhar in the key roles. This TV show has a Kolhapuri flavor and is likely to hit the said channel on 3rd October 2016. It will be a six day TV show which will aired sharp at 7.30 pm and as per the makers of the TV show, it is likely to run over the said channel for next 14 months. Soon you will find this TV show to be replacing the Zee Marathi program called Nanda Saukhya Bhare.

The plot or story of the TV show revolves around the soft hearted wrestler who hails from a small town. He is a simple man with no love in his life, however, soon he comes across a gorgeous girl near his place to whom he silently falls in love with the same.

But instead of accepting the same, he is seen denying these feelings but love has to bloom in his heart so, what happens the next is interesting to catch up in the TV show. The makers of the TV serial have already released the promos and these are getting good response in the media.