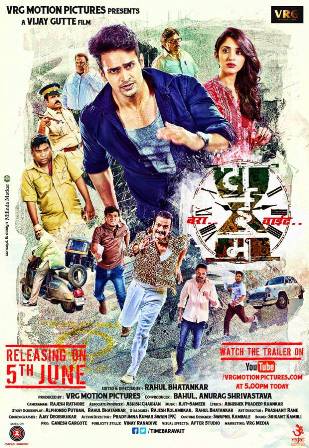 Time Bara Vait is a dramedy movie directed by Rahul Bhatankar that is soon to be released this June 2015. The star cast for this movie includes starring, Nidhi Oza, Satish Rajwade, Vishwajeet Pradhan, and Bhushan Pradhan.

The main story revolves around a young man named Rahul, who seems to have struck out in a time of bad luck where one thing after another goes increasingly wrong. For while his life starts of peachy enough with a good job and a promised marriage to his girlfriend, Priya, his luck barely holds out until his whole life comes tumbling down.

It starts off with him losing his job, and that’s the initial domino that starts off the chain of bad luck events. For, because he lost his job, Priya’s father calls off his wedding to her and starts looking for a new groom for her. Even worse, Bhai Raja, from whom he’d borrowed money from before for his sister’s wedding, starts persecuting him to pay back the loan and his deadline to pay it back is that very evening. He briefly saves his situation by borrowing money from his friend to pay off the loan shark, but then he’s robbed! Simultaneously, Priya has run away from home to elope with Rahul. But her father files a complaint with the police that he’s kidnapped her, which means he has to now steer clear of the police as well. And to top it all off, in the middle of this mess, his brother-in-law is hounding him for money to start a business. Talk about a string of bad luck!

This is definitely a movie you must watch, if at least to find out how poor Rahul gets out of this mess!