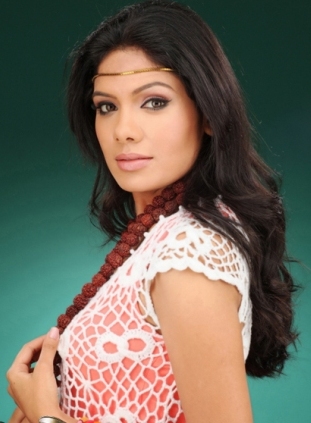 Suruchi Adarkar plays the lead role , Aditi, in the popular Marathi show Ka Re Durva. This vibrant and high spirited girl from Mumbai paints fresh colours in the character of Aditi who is an independent and etiquetted girl. Like her character, Aditi, Suruchi is also a girl with high aspirations and dreams. She chose the field of acting over other career paths. In her own words, it was not an easy decision but she is proud to have made a mark for herself in this era of cut throat competition.

In KA Re Durva , Suruchi plays the wife of Jay, played by Suyash Tilak. The two are an ambitious couple who are full of dreams to make it big in their respective careers. As the two search for job, they end up working in the same office sharing the same working space. Due to official commitments and to keep their jobs safe, they decide to keep their relationship a secret. Suruchi portrays the fun loving simple girl , Aditi , whereas Suyash also matches her charm with ease. The character of Aditi is at present one of the most popular ones on the Marathi television. The pairing of Suyash and Suruchi is quite popular and the show rakes in good number of TRPs for the channel Zee Marathi.

Before she stepped in Zee Marathi’s KA Re Durva in 2014, Suruchi was noticed for her impactful performance in the serial Apla Bua Asa Ahe on ETV Marathi. The actress has a knack to emote the tiniest expressions with a beauty of her own. Her very expressive eyes and face are great assets to her.

Born on April 25, Suruchi has also been a part of serials like Olakh (Star Pravah) ,1 Taas Bhutacha – Punarbhet (Mi Marathi) , Pehchaan as Vidya (DD1). In 2013, she played a small role in the family drama , Maat. The movie was written by accomplished acress Tejaswini Pandit and Suruchi was cast in a small role in the film.

Having played traditional roles very often, Suruchi once stated that she is looking forward to experiment with her roles. She would love to play roles of varied shades. Apart from acting she is passionate about movies and chilling out with friends is her favorite way to cast off stress. Suruchi believes in following a strict fitness regime in order to keep herself fit and healthy.