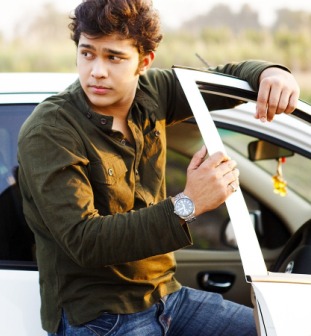 His dashing good looks can sweep you off your feet. But this charming lad from Pune isn’t only a heart winner but also a talented actor. After completing his education, this youngster set out to pursue a character in acting. Today he is a known face on Marathi television with two of his serials going great guns in TRPS. Ka re Durava as Jay (Zee Marathi) is currently a highly rated serial on Marathi Television. Durva, on Star Pravah, where he shares screen space with veteran actors, is also raking in huge TRPS. Suyash’s good looks have earned him the notice of the film makers as well and this environment graduate has played pivotal roles in Classmates and Bhakharkhadi 7km (2014) , Langar Ek Paash, Diwas Ha Maza. In classmates, that released this year, Suyash played the role of Amit and worked with stars like Ankush Chuadhary, Sai Tamhankar and Sonalee Kuulkarni. Apart from these, he has worked in serials namely   Pudhcha Paul and Bandh Reshamache.

Born on 10 January, Suyash Tilak hails from Pune where he could hone his skills in acting from a young age itself. Thanks to his dedication to his profession, he has been a part of well known plays like 400 Koti Visarbhole, Zade Lavanara Manus, Adnyat Zaryavar Ratri. In these , he has worked with renown directors like Swanand Barve and Mohit Takalkar.

Suyash Tilak is an environment graduate and acting is his first passion. Besides this, he is also a wild life enthusiast and often likes to go on wild life adventure trips with friends. He has also got a penchant for wild life photography and plays water sports with the gusto of a professional. At times , he indulges in swimming to keep himself fit. Suyash is enthusiastic about his work out sessions and is dedicated to his fitness regime.

The youngster who is eying bigger projects in Marathi film industry this year says that he is a diehard romantic. When he is not shooting he enjoys listening to music , especially romantic ones. He enjoys his trips at natural locals and that he finds to be the best way to distress after long periods of shoots. Suyash believes eating right and working out is the best way to keep oneself fit. He balances his work life and hobbies perfectly.

Suyash has stepped into almost all he domains of acting namely Tv, Films and theater. Though he enjoys acting in all these domains , the youngster ultimately wants to make it big in the film industry. Currently he is working on Priya Aais, a Marathi film.