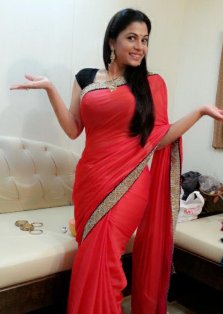 Sulekha Talwalkar is a known face in Marathi world who has acted in all formats including theatres, TV and films. She was born on 8th October 1971 in Mumbai where she was raised as well. She did her schooling from King George School and college from Mumbai itself completing her graduation from the popular college called Rui College from Matunga. She has been the part of the theatre group since her college days apart from being active in her cultural activities in her student life. Hence when she completed her studies, she knew what to do. She simply headed to the acting world to find out her way to carve the niche in this industry.

Her first commercial play was Saatchya Aat Gharat and later she did the movie with same name in 2004 over the silver screen. Her other play include Mahasagar, which is popular in her career. Soon she got the chance to act over the small screen, which started with the show called Teri Bhi Chup Meri Bhi Chup, which aired at Zee TV. She then was seen in other Hindi TV shows mostly from Adhikhari Brothers. In the year 1995, she got her first break in Marathi films in a movie called Aai directed by Mahesh Manjrekar. Since then it was no looking back for her as she got a number of TV shows including Bolachich Kadhi Bolachach Bhaat, Jaawai Shodh, Shrawan Sari, Avantika, Shejari Shejari Pakke Shejari, Ase He Kanyadaa, Asambhav and Agnihotra to name a few.

Similarly, her list of movies, which she did in her career span, is also big. These include Dusri Goshta, Prime Time, Shyamche Vadil, Sanshaykallol, Premachi Goshta, Shyamche Vadil, Tinhisanja, Tujhya-Majhyat and Kadachit. As far as her personal life is concerned, she is married to Amber Talwalkar and the couple has three kids (one son and two daughters). Her mother is law called Smita Talwalkar who is a popular actress, while the family also runs a chain of gym called Talwalkar, which is popular in entire Maharashtra state.