After giving a couple of hits in M Town including the super hit films like Timepass and Urfi, the Marathi movie actor Prathamesh Parab will be seen in a Hindi play called Laut Aao Gauri. This play will be seen in Dahani Kar College, which will have the star cast comprising of people like Vibhav Rajadhyaksha, Suvrato Prabhakar Singh, Vedangi Kulkarni, Siddhesh Pujare, Prathamesh and Tejaswini Kasare.

This Hindi play is written by Parag Ojha, while it is directed by the writer itself along with Kunal and Susheel. It is a one act play, which has received third prize in the recently conducted youth festival in Mumbai city. The has been getting a decent response along with all rounds of applauds by the people catching up the play at various platforms including the ones like Indian Peoples Theatre Association, Indian National Theatre, IIT Mood Indigo.

The story of the play revolves around the life of poor farmer who has six year old daughter called Guari who has gone missing. It shows the condition of a man who loses his daughter and reports the incident to the police, but the department simply sits and waste time apart from fooling him. This play was inaugurated by Prabodhankar Thackray, which was shown on 22nd May. The next show is scheduled in June in different dates at places like Savarkar Smarkar, Dadar, Sathe Theatre Vile Parle and so on. 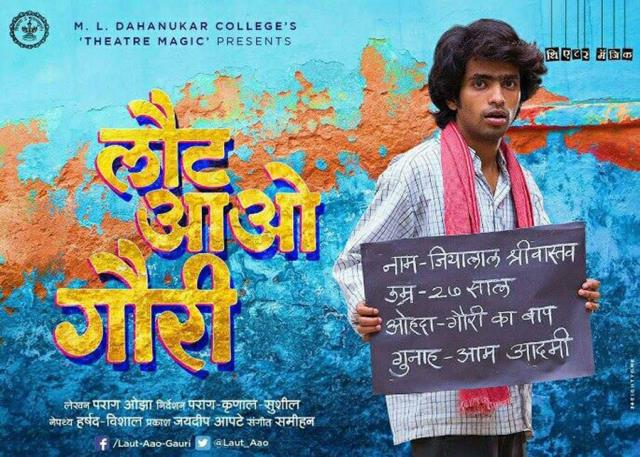 Previous Sulekha Talwalkar
Next Swwapnil Joshi and Sachin Pilgaonkar roped in for Waaras!