Satvya Mulichi Satvi Mulgi is a upcoming Marathi serial will airs on Zee Marathi. We are always curious about what will happen in the future and we will be surprised when we see the future. This is exactly what happened in Netra’s life in Satvya Mulichi Satvi Mulgi serial. The eye speaks about what will happen in the future. But, people blame her without understanding her. So the eye has to face a new challenge every time. The story of this eye will soon be seen on Zee Marathi channel.

Netra, the heroine of the serial ‘Satvya Mulichi Satavi Mulichi’, sees what will happen in the future. That’s why despite being an ordinary village girl, she becomes extraordinary. Trinayana Devi herself has given Netra the boon of being able to see the future. Netra wants to use this divine power of hers for the betterment of the society. But even though she sees a future, her life is not easy. She has to face many problems. It will be exciting to see how this eye looks at the future while living the present life.

The presentation of this series will be done in a mysterious manner and the unique aspects of human emotions and relationships will be revealed. Recently, the first promo of this series has come to the audience. In this promo, we can see a glimpse of what the plot of the series will be. In this, some villagers are seen making many accusations against a girl. All the things she said are coming true and she is being abused. However, her grandfather says that his granddaughter is not cursed, but has been blessed by the Goddess herself. So, the girl says that we are not telling the happenings, but what is going to happen.

These actor are in the lead role

Actors Titiksha Tawde and Ajinkya Nanavare will play the lead roles in the serial ‘Satvya Mulchi Satavi Mulagi’. Also, Aishwarya Narkar, Mugdha Godbole, Rajni Velankar, Ajinkya Joshi, Jayant Ghate, Rahul Mehendale will also be seen in important roles in this series. Kiran Bidkar and Abhiram Ramdasi are the writers of this series. So, the serial is produced by Iris Production (Vidyadhar Pathare). Satavya Mulchi Satavi Mulga’ is a mysterious mystery series which will be aired on Zee Marathi from 12th September at 10.30 PM. 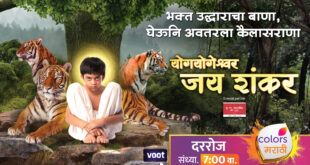