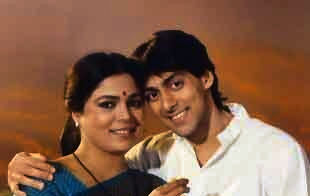 Salman graced the occasion of the music launch of Saangto Aika. The Bollywood superstar showered praises on Marathi films and its actors. The occasion gave him an opportunity to meet his on screen mother in the film Mene Pyar Kiya , Reema Lagoo. Both the actors were very happy to meet each other. Salman was seen hugging her warmly and Reema too fondly hugged him. Mene Pyar Kiya was at the launch vehicle for Salman in the early 90s which brought him stardom and made him a popular.

On the music launch, Salman’s warmth and affection for Reema who has played his loving mother also in Hum Saath Saath Hain, was visibly and the lady too reciprocated and as if it was a mother son duo meeting after longtime. On the occasion Salman spoke about the achievements of Marathi cinema and also revealed that he is attached to the regional cinema because he grew up watching many Marathi language films since his childhood. Laxmikant Barde who was also a popular actor and played a crucial and endearing role in the film Hum Apke Hain Koun also belongs to the Marathi industry. Salman’s rapport with actors like Sachin Pilgaokar was evident on the occasion. Looking stylish in black attire , Salman behaved in a very down to earth manner with the actors whom he was so fond of.