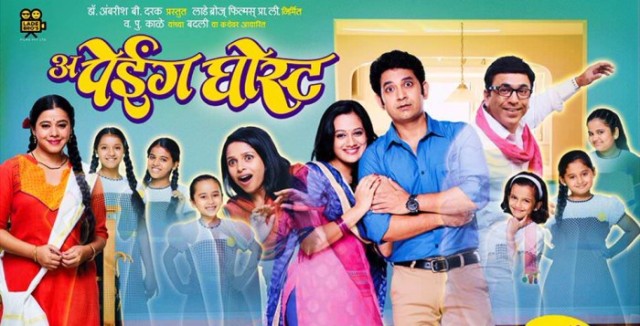 Umesh Kamat and Spruha Joshi play a couple in Sushrut Bhagwat directed film ,Paying Ghost. As the name suggest the film is spooky. But not one that will make your hair stand on end but one that will amuse you. Umesh Kamat plays a simpleton who lives alone in his chawl. One fateful night, the door knocks and enters an unknown person who reveals that he is a ghost and needs shelter. Out of his incapability to say to no to  anybody, Umesh agrees to give shelter to him but little did he know that seven more members of the same family will follow. Yes, it is not just one ghost that haunts this house but eight in total who accommodate themselves in this little place. And thus they become the Paying guests for Umesh and in fact the Paying Ghost literally.

Umesh ‘s life takes a twist thereafter and how interesting changes takes place in his life is the story all about. Spruha Joshi plays his love  interest who also joins in the messy yet entertaining story. The young couple literally play Host for the Ghosts who become their paying guest and make their life extraordinary.  A new concept , this film is much better than the so called horror tales that are terribly flop. Paying Ghost also touches the subject of vices in the society like corruption which is seen from the point of view of ghosts.
Umesh and Spruha make an adorable couple and pull of splendid performances. A host of ghosts making a twisted tale of merriment and surprises with good performances is the positive about the film. It is simple yet entertaining.

Kudos to the writer V.P. Kale who brought up this concept and penned down an amazing tale. Director Sushrut Bhagwat has left no stone unturned in painting the scenes on the screen beautifully. Music by Narendra Bhide is spooky and blends well with the story. The Paying Ghost is an amazing entertainer for this weekend. It promises a fun time for your family. It s film that audience of all age will enjoy.