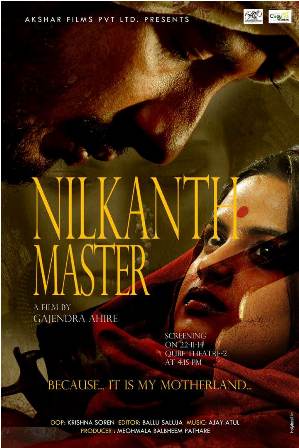 Nilkanth Master is a much anticipated Marathi movie of drama genre that is expected to be released this summer. It is a much anticipated movie by the fan followers of Vikram Gokhale, who is said to have a wonderful role carved out. The other star cast of the movie includes the likes of Adinath Kothare, Omkar Govardhan, Kishore Kadam, Pooja Sawant, Neha Mahajan and others. The producer of this movie is Meghmala Balbhim Pathare. Gajendra Ahire is its director. Akshar Films Private Limited has lent its support in producing this movie. Apart from being the director, Gajendra is also credited of being the story writer and to provide screenplay. Music has been composed by Ajay – Atul and is expected to be melodious and a runway hit. Krishna Soren is the director of photography. Sound design has been provided by Vijay Bhope, while its background music score has been contributed by Chaitanya Adkar. Ballu Saluja is its editor and Rishikesh Pathare is the executive producer. Rohan Shah is the Line producer.

According to the director, Gajendra Ahire, this movie is considered to be a period film that has been set during the pre-Independence era. It is regarded to be a love story having Quit Movement that had a strong wave in Maharashtra to be its backdrop.

Being titled as ‘Nilkanth Master’, this movie has ‘Vande Mataram’, the national song to be recomposed by the well known music director duo Atul Gogavale and Ajay. With periodic movies catching on the craze in Marathi movie, the director of this film has been trying to cash in on the craze with this movie. He stated that this movie is expected to do well at the box office and be appreciated by both the public and the critics for its story, romance, along with the pre-independence movement in the background.