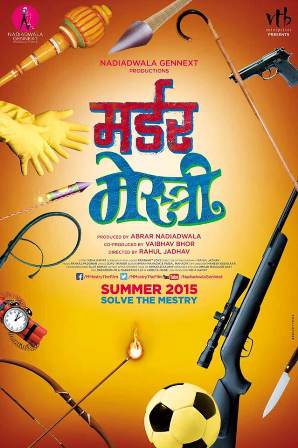 Murder Mestri is an upcoming Marathi movie that is expected to be released this summer. This much anticipated movie has been produced by Abrar Nadiadwala, while its director is Rahul Jadhav. Nadiadwala Gennex Productions is credited with taking this assignment and promises its viewers of a blockbuster movie. The leading star cast includes Hruishikesh Joshi, Dilip Prabhavalkar, Vikas Kadam, Kranti Redkar, Vandana Gupte, Sanjay Khapre, Kamlakar Satpute, Devendra Bhagat, Mansi Naik and others. Music for this film has been composed by Pankaj Padghan and Neha Kamat is the writer. The lyrics have been provided by Guru Thakur. Prashant Loke has provided the dialogues and screenplay. Mahesh Kudalkar is the Art director and the movie’s cinematography is by Rahul Jadhav. Omkar Mangesh Dutt has looked after costumes of the star cast.

Murder Mestri according to its makers is considered to be completely a sitcom movie that is a multi-starrer and sure to keep the fans seated with excitement till the end and with each frame. As the name of the movie suggests, it is a real thriller and expected to keep the viewers guessing until the last scene. Nadiadwala is said to have been a well known banner in the Bollywood movie industry for the last six decades. They are known to have come up with plenty of blockbuster hits to their credit and different Hindi genre movies. It is for the first time that this banner is producing a Marathi movie.

In the last few years, there has been a dramatic change in the way Marathi industry is being seen. It has been really good for the box office and content as well. Most Bollywood movie producers these days are looking towards Marathi cinema as bright perspective. Rahul Jadhav, the director was happy to be entrusted on getting the cap and being trusted upon for directing this movie, under such a reputed banner.